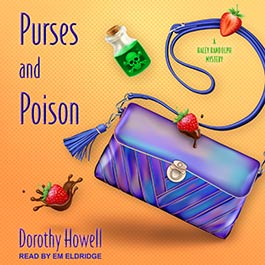 When Haley arrives at the Holt’s employee luncheon and fashion show, she spies a sick server hiding in the stock room. Deciding to help out, Haley grabs a uniform. Besides she might score some points with her sort-of boyfriend and store owner Ty Cameron. The catered array of food and personalized fruit bouquets from Edible Elegance – her mom’s latest business venture – is a hit until top fashion model and Ty’s ex-girlfriend Claudia Gray is found dead in the ladies room.

It’s going to take more than a Chanel sample sale to ease Haley’s panic once she learns Claudia’s been poisoned. With homicide detectives looking for the “missing server,” Haley’s whereabouts unaccounted for during the luncheon and Edible Elegance gone sour, she’d better uncover the tainted truth – quick!

Ty looked down at me, exuding comfort and concern. I’d never gotten that look from him before, and it was nice – or it would have been if there was any way possible I could have been comforted at this particular moment.

Ty and I moved forward, down the aisle toward Jeanette’s office where the homicide detectives waited. I stopped dead in my tracks.

I can’t go in there. I can’t. What am I going to tell the detectives? How am I going to explain what happened? Especially with Ty standing right next to me?

I sure could use a Snickers bar right now.

“I need to ask you something,” I said, hoping he wouldn’t see that I was stalling.

Should I just bolt? Jump in my car and disappear, never to be heard from again?

Ty was still watching me. I was still getting the concerned look. I had to say something.

“Yesterday when I called you about Claudia’s death, why you didn’t call me back?” I asked.

“Yeah, but I left a message saying it was an emergency. Weren’t you concerned that something had happened to me?”

“I knew nothing had happened to you. You called me.”

Oh. Yeah, right, I did. And it made sense, just like everything that involved Ty. But what if I’d called from the emergency room? What if I was down to my last breath?

I would have asked Ty both those questions but he’d already walked away. He opened the door to Jeanette’s office, swinging it wide so I had no choice but to go inside.

I felt like I was walking into the principal’s office.

Detective Madison sat behind Jeanette’s desk. Shuman stood behind him, off to the right.

“So, Miss Randolph,” Detective Madison said, giving me a snarky grin. “You again.”

I sat in the chair in front of the desk and Ty sat beside me. Why was he in here? Why did he pick now, of all times, to be the concerned boyfriend?

“Just like old times, huh?” Detective Madison reared back in the chair. “You, me, a murder victim.”

“Claudia was murdered?” I asked. I figured she probably was, but this delayed his questioning a little.

I turned to Ty and touched his hand.

“This will be hard for you to hear,” I said, managing to sound compassionate. “You should wait outside.”

Ty ignored me and asked the detective, “What sort of poison?”

Shuman checked his notes. “The lab is still working on the tox screen.”

“So you’re investigating the caterer?” I asked.

I hated to throw Marilyn what’s-her-name out in front of the bus, but the police probably already had her at the top of their list.

“Me?” I exclaimed. I tried for innocent outrage, but didn’t quite pull it off.

“What can you tell us about yesterday?” Shuman asked.

“Nothing.” Okay, that sounded kind of guilty.

“Nothing?” Madison snorted a laugh. “Well, let me tell you something about yesterday. You were seen entering the loading dock.”

That fat cow Rita must have ratted me out.

“Even though you knew the stock room and store were off limits,” Madison added. “And you were seen at the caterer’s food station, messing around with those fruit bouquets.”

Oh my God. Oh my God. The fruit bouquets – Mom’s fruit bouquets. I didn’t want to tell Madison they were from my mom’s business. He’d be all over that. I couldn’t let him drag her into a murder investigation.

“I was just checking them out,” I explained. “I thought I recognized the caterer. Marilyn something-or-other.”

“Nobody saw you during the luncheon,” Madison told me. “You want to explain where you were?”

I couldn’t explain. Not now. Not in front of Ty. I couldn’t admit to what I’d done, all the problems I’d caused – which didn’t seem like such a big deal at the time – and have everybody know what I’d done. The reasons – which were perfectly logical yesterday – seemed pretty lame right now.

“You were seen on the video surveillance tape going into the loading dock,” Madison said. “But you weren’t seen again until after Claudia Gray was murdered. Surveillance tape doesn’t lie.”

Damn that video tape. I always forget about it.

“Well, Miss Randolph?” Madison sneered, like he knew I didn’t have a good explanation.

Shuman was looking at me weird now. So was Ty.

Where is Sarah Covington? She’s always interrupting Ty. Why can’t she show up the one time I need her?

I have to tell them something. What sort of explanation can I give? Alien encounter? Out of body experience? Cramps?

“Okay, well, when I was in the loading dock, I heard a noise – a strange noise – in the stock room,” I said. It didn’t come off as a total lie, which I was thankful for.

Detective Shuman leaned forward a bit, as if I were about to reveal something significant. Madison looked disappointed that I might.

“What sort of noise?” Madison demanded.

“Don’t get all excited,” I told him. “I’m not going to solve this case for you too.”

Shuman looked at me really weird now. So did Ty.

I could seriously kill someone for a Snickers bar right now.

I popped out of my chair while I had the chance.

Ty got up when I did. I guess he was antsy about sitting there any longer. He hadn’t been on his cell phone for a good ten minutes.

He opened the door and there stood Sarah Covington. She looked right through me. The two of them drew together as if they were magnetized and moved down the hallway a few feet, Sarah talking low and urgently, Ty listening carefully.

“I know about Claudia Gray and your boyfriend,” Detective Madison called.

How had he found out so quickly that Ty and Claudia used to date?

Madison smirked. “Claudia was quite the looker. On the covers of all the big magazines. Appearing at those fashion shows. Everybody probably wondered what Cameron saw in you.”

My stomach jerked into a knot and my cheeks heated up. Madison hoisted himself out of the desk chair and walked over to me.

“You must have wondered the same thing yourself,” he added, looking me up and down.

I knew he was comparing me to Claudia, and I wished I could say it didn’t matter. But it did. I knew how gorgeous she was. I didn’t need Madison to tell me I didn’t measure up.

Breath went out of me. My cheeks flamed.

“Maybe you heard the same thing that I heard,” Madison said, moving even closer. “That the two of them were getting back together.”

I gulped, stunned. I know it showed on my face because the detective grinned sadistically.

“Sounds like a motive for murder to me,” he said, looking all together pleased with himself.

Click here for the Purses and Poison Reading Group Guide!