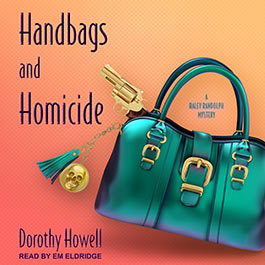 According to Haley Randolph, you can never have enough handbags. She has one for every occasion, but that doesn’t mean she won’t go to any lengths to get the season’s latest bag. Unfortunately for Haley, her life goes from glam to grim when her passion for fashion outlasts her credit cards, and she’s forced to work at Holt’s – a mid-market department store that doesn’t even stock designer labels!

Looking to escape from crazed shoppers, Haley sneaks into the stock room to take a break and finds her boss is the ultimate fashion victim. He’s face-down in lingerie – stone-cold dead. With everyone in the store eyeing her like last season’s Marc Jacobs, Haley turns to hunky Ty Cameron to help her investigate the murder.

In a race to clear her rep, Haley’s knowledge of hot trends takes her from the sales floor to the boardroom to the gritty streets of L.A.’s Garment District. Haley must find a killer with impeccable fashion taste – and get her hands on a smoking-hot handbag – before time runs out!

The break room door swung open and in walked Craig and the two detectives.  Introductions were made and the men conversed quietly on the other side of the room, as if I weren’t there flipping through People.  Ty was doing a lot of murmuring so I figured the cops were chewing him a new one over the store’s lax security.

Finally Detective Madison turned to me, the other men fanning out around him, all staring down at me.

“So let me get this straight,” he said, sounding really annoyed.  “You were alone when you found the body and no one else was around.”

“It’s pretty complicated but I think you’ve got it right,” I told him.

I need to lay off the sugar.

He didn’t seem troubled by my testy attitude.  Guess he was used to it.

“You were working near the stock room doors, right?” Detective Madison asked.  “Back there in the women’s underwear section?  Right?”

“And you didn’t see anybody go into the stock room?”

“No, I didn’t,” I said.  Unless, of course, someone had gone in while I was crouched behind the panty hose display hiding from that bra customer.

I didn’t see any need to mention that.

“So you saw nobody go in,” Detective Madison said.  “See anyone come out?”

“And when you found the body, you didn’t see anyone in the stock room?  Anywhere?”

“I told you I didn’t see or hear anybody in the stock room,” I said.

“So it was just you?  Back there alone?  That whole big stock room and no one else was around?”

My voice trailed off because even I heard the guilt coming through.

Both detectives looked ready to slap the cuffs on me.  Ty looked suspicious and Craig appeared relieved that the killer had been found so quickly.

We all stayed like that for a minute or so, me trying to look innocent – a lot harder to pull off than an of-course-you-can smile – and all the men glaring down at me.

Then Detective Madison turned to Ty.  “Let’s get the security tapes from the stock room, have a look at them.  You can point out who’s who on the tape.”

There were security cameras in the stock room?  The police were going to look at the tape?  Along with store personnel?

And they’d see me lounging on the king-size Laura Ashley bed-in-a-bag sets when I was supposed to be working?