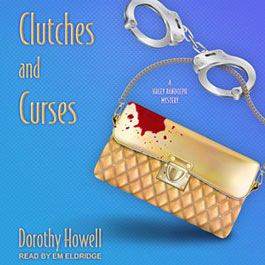 Fleeing Los Angeles in the hope of escaping a curse put on her by a disgruntled customer at Holt’s Department Store, Haley takes a temporary job stocking a new store that’s opening in Sin City.  When her high school rival is found murdered in a dressing room, Haley becomes the prime suspect.

To prove her innocence, Haley takes on aliens, a psychic, her high school crush, and the Russian mafia – while searching for the hottest purse of the season, of course – where else but at a handbag lovers’ convention!

Totally hot private investigator Jack Bishop shows up reminding Haley that what happens in Vegas stays in Vegas.  Then boyfriend Ty arrives and makes her an offer she can’t refuse – or can she?

No sense in delaying this interview.  I had nothing to hide, nothing to cover up.  No way were these detectives going to cause me a minute’s worry.  I wanted to get this over with, get to the hotel and crash before the brain-boosting snacks I’d eaten – strictly to aid law enforcement, of course – wore off.

Detective Dailey got the preliminaries out of the way quickly by asking my name and address, the name of the hotel I was staying in, and checking my I.D. while Detective Webster wrote it in a little notebook he carried.

“You’re here to help with the opening of the store?” Dailey asked.

“From Los Angeles?” he asked.

“And you got here this morning?”

I figured he’d already asked Preston these things and just wanted to hear me say them to make sure the story stayed the same.

Still, Detective Webster was writing down everything I said like it was really important.  That weirded me out a little.

“What made you decide to drive up here to work?” Dailey asked.

The key to being questioned by homicide detectives was to be brief in your answers.  Don’t talk anymore than necessary.  Don’t give away much.  Don’t volunteer anything.

So I saw no need to tell him about the crazy old woman who’d claimed to put a curse on me, my dented fender, the traffic ticket, or my mom’s offer to take me to the spa for a week with the beauty queens.  Really, none of that was relevant.

“It just seemed like a good opportunity,” I told him, pleased that the liberal chocolate coating I’d applied to my brain cells had my thoughts clicking along like stilettos on a New York catwalk.

Detective Dailey looked at me as if that weren’t enough of an answer.  I pressed my lips together to keep from saying anything else.  That’s the mistake criminals always made on those detective shows on television.  They started blabbing and didn’t shut up.  No way was I doing that.

“How did you happen to find the body?” Dailey asked.

“I saw the stain on the carpet and thought it was Bolt, so I –“

“Bolt?”  Detective Webster shot the question at me like it was a bullet from a 9mm handgun.

“It’s an energy drink Holt’s is selling,” I explained.

Detective Webster wrote that down, for some reason.

“I followed the stain on the carpet into the dressing room,” I said.  “That’s when I found the dead girl.”

“Why would you do that?  Follow the trail?” Dailey asked.  “Why not find the janitor to clean it up?”

Good question.  Damn, these homicide detectives were quick – and I doubted they were jacked up on chocolate.

Explaining that I’d planned to take a break and guzzle some Bolt – as I’d done in the Santa Clarita store – might not cast me in the best light.  It’s not a crime, but still.  No need to get too deep into things.

“I just wanted to see how big the stain was so I could tell the janitor what he’d need to clean it,” I said.

Okay, that sounded lame.  Jeez, had my chocolate-charged super-brain let me down?  Already?

“Did you know the victim?” Detective Dailey asked.

Webster wrote that down.  I saw him underline it.

“Ever seen her before?” Dailey asked.

Webster wrote that down, too.  He underlined it twice.

Detective Dailey leaned back in his chair.   “Come to Henderson often?” he asked.

Dailey nodded and rose from his chair.  He looked a little tired, slightly weary, as if he’d hoped I could give him more info, help him solve this crime.

A murder in a department store that catered to families wasn’t good for business, wouldn’t draw the hordes of Vegas shoppers out to Henderson.  I figured Detective Dailey was under some pressure to solve this murder quickly.

“Thank you, Miss Randolph,” he said and left.

Detective Webster followed him out of the room.  At the door, he looked back and gave me a stinky look – for a second I thought he might put another curse on me – then left.